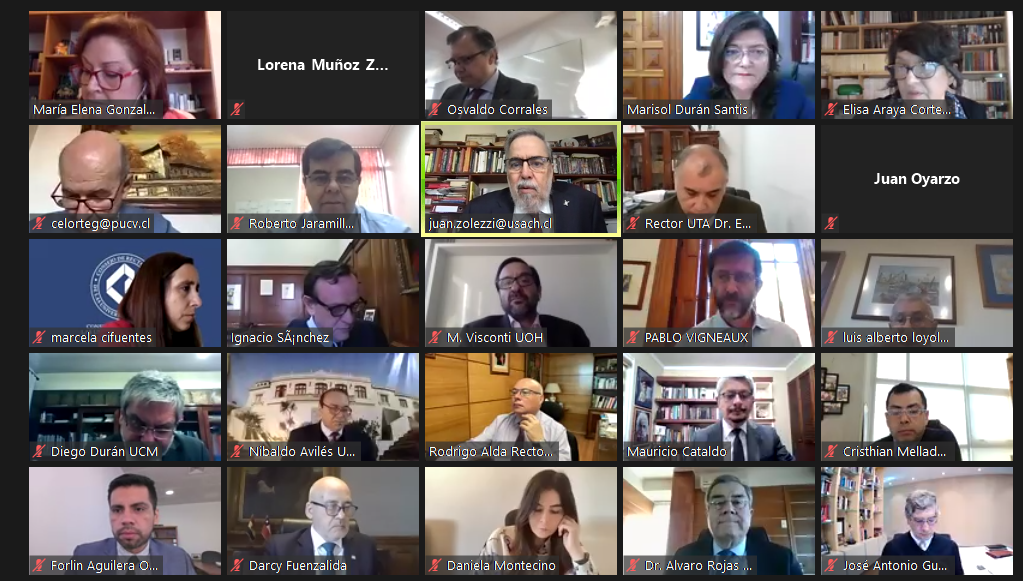 Situation of the General Secretariat, gender policies and costs of the pandemic in the universities marked the session of the Council of Rectors

The Minister of Education will receive representatives of the CRUCH next week to discuss the unanimous request of the CRUCH to renew the appointment of the current Secretary General.

The plenary session of rectors and rectors also reviewed a document on guidelines to establish gender equality policies in universities and a report on the financial impact of the health crisis on universities, which is calculated at $185,263 million pesos for the year 2021.

The decision of the Ministry of Education not to renew the current Secretary General, María Elena González, was one of the main issues addressed this Thursday at session No. 627 of the Council of Rectors of Chilean Universities (CRUCH).

The university authorities reiterated that there is no well-founded reason for the non-renewal of the appointment, since the performance evaluations of the General Secretary are excellent. Rector Zolezzi said that "it is a position of trust and is very relevant for the proper functioning of the Council of Rectors and, therefore, several weeks ago we requested a meeting to dialogue with the Minister of Education, Raúl Figueroa."

During the session, the plenary was informed that the Minister of Education had responded during the morning and that he will receive the rectors next week.

The meeting also analyzed the main contents of the document "Guidelines to establish a gender equality policy in universities", prepared by the CRUCH Gender Equality Commission.

The rector in charge of the Gender Equality Commission, Natacha Pino, highlighted the work of the commission and the universities. In this regard, she pointed out that “all CRUCH universities have been making progress on these issues, in installing their protocols, in strengthening the gender equality or equity departments ”. In addition, it stated that in the context of Law No. 21,369, which regulates Sexual Harassment, Violence and Gender Discrimination in the field of Higher Education, published on September 15, it is more urgent that universities continue to advance in this ambit.

Meanwhile, the president of the Gender Equality commission, Antonia Santos, pointed out that since the commission was created in 2018, all CRUCH universities "have crossed an important threshold", which is related to "three actions that they have done well: the universities know what the institution's gender gaps are, they all have a human group and infrastructure, and they all have protocols to address gender violence ”. The president of the commission said that "these three milestones show the political will that has been on the part of the rectors and the rectors that make up the CRUCH."

Regarding the document itself, Santos explained that it has 3 axes, “the first refers to the need to institutionalize gender units, the second deals with how to proceed to impregnate the university with elements that contribute to favoring and ensuring equality of gender. The third axis refers to how to prevent, address and eradicate violence ”.

Regarding the new law No. 21,369, the president of the commission indicated that "universities must review their protocols to move towards a more comprehensive view, but I would say that we are well prepared for it, since we have good protocols and good teams." .

On the other hand, the rectors and rectors approved the report on the financial impact of the health and social emergency of Covid-19 in the CRUCH universities.

The report provides data on the lower income received by the academic institutions, the behavior of expenses during the 2021 budget year, and a comparison with the 2020 budget execution.

During 2021, the CRUCH universities have stopped receiving an amount greater than $141 billion pesos, due to the lower resources obtained from fees and undergraduate tuition; the application of article 108 of Law No. 21,091 on Higher Education; the decrease in postgraduate income; the reduction of continuous training and academic cooperation activities and lower sales of services. In 2020 the institutions stopped receiving $228,354 million pesos.

Regarding expenses, due to the pandemic, during this year the CRUCH universities have allocated $62,668 million pesos to cover expenses related to the adequacy of institutional operation, face the health crisis and implement semi-presence. In 2020, these expenses totaled $75.402 million pesos.

On the other hand, this same situation has generated savings due to the suspension of face-to-face activities for an aggregate amount of $18,688 million pesos in 2021; while in 2020 the amount in this item was $55,793 million pesos.

Adding these three categories, the financial impact of the pandemic on CRUCH universities during 2021 is $185,263 million pesos. The year 2020 was $247,963 million pesos. Considering the above, to date the total impact amounts to $433,226 billion pesos.

Another of the topics analyzed by the full Board was the Admission Process 2022, through a presentation of the CRUCH Admission and Enrollment Commission, by the rector of the U. Católica del Maule, Diego Durán.

In the presentation made by Ruth Candia, who chairs this Commission, the work carried out with the Mineduc Access System was reported, as well as the internal analysis regarding special income, the pedagogical qualification route and technical careers.

On the occasion, the proposal for a third enrollment period was especially analyzed, against which the principals agreed on the importance of aspects such as this being clearly regulated, with transparent regulations and of public knowledge. The need for mechanisms to discourage practices that could harm the system as a whole and its credibility was also addressed.