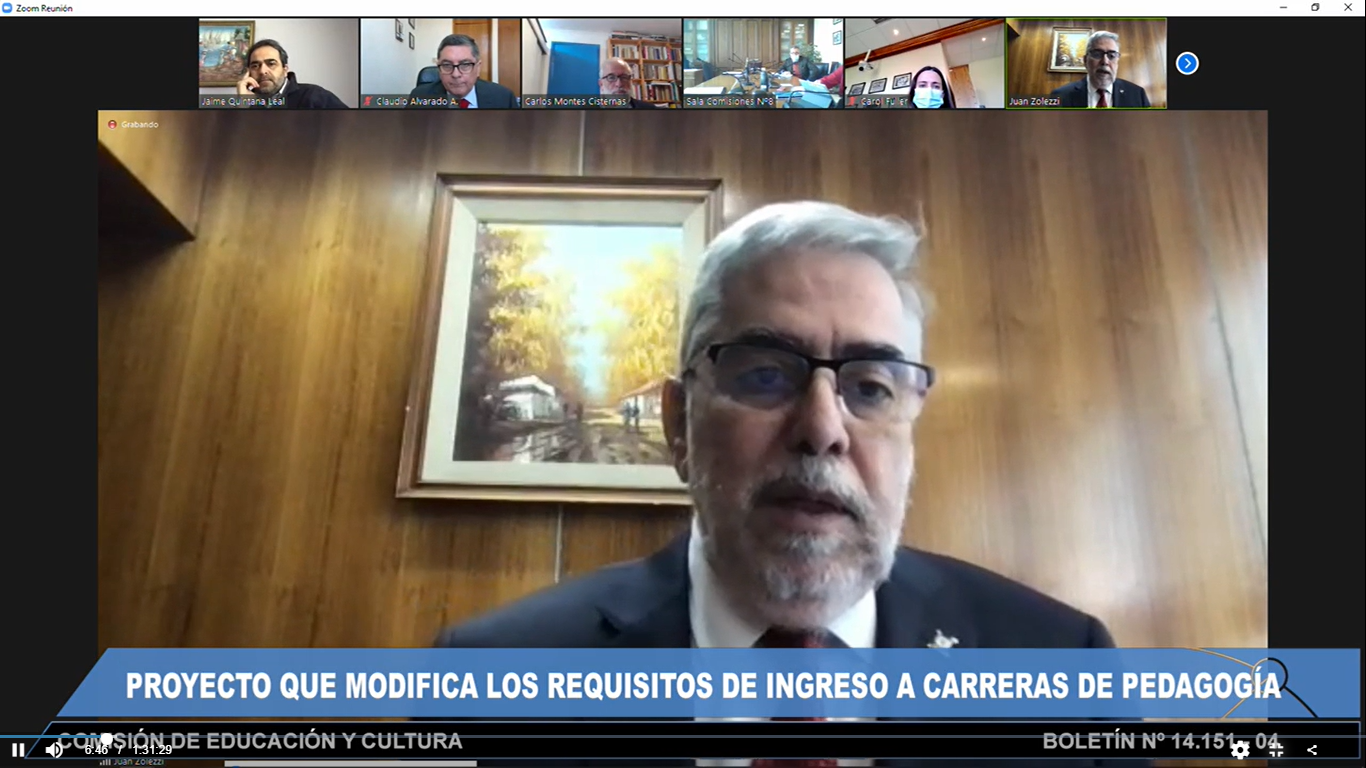 Executive Vice President of CRUCH: "The drop in vocations to enter pedagogy programs has become systematic and systemic"

The rector of the University of Santiago, Juan Manuel Zolezzi, addressed the bill that modifies the entry requirements for these careers, ensuring that the initiative, by itself “does not solve one of the greatest difficulties present in the system: attraction of academically outstanding applicants ”.

"The drop in vocations to enter pedagogy programs has become systematic and systemic, and if effective measures are not taken to remedy it, it will aggravate the crisis that the educational sector is currently experiencing at the national level," warned the executive vice president of the Council of Rectors of the Chilean Universities (CRUCH) and rector of the University of Santiago, Juan Manuel Zolezzi.

The academic authority presented this Wednesday before the Senate Education commission, which reviews the bill that modifies the entry requirements for pedagogy careers (bulletin N ° 14151-04) and that it is in the second constitutional process.

Rector Zolezzi appreciated the initiative promoted by the Ministry of Education, ensuring that "it takes care of at least one aspect of the problem" and that it "reinforces the access route through special programs, emphasizing preparation during education. medium and in capturing vocations and early capacities of aspiring teachers ”.

However, the executive vice president of CRUCH stated that "the law, by itself, does not solve one of the greatest difficulties present in the system today: attracting academically outstanding applicants."

Zolezzi also said that "the proposed modifications do not constitute a quality or promotion mechanism for pedagogical vocations" and that neither will "solve the multiple causes that affect the problem of teacher deficit, and do not affect dropout during the study of the career. , job desertion, nor will they generate greater attraction for young people ”.

He also warned that it should be considered that the increased demands on pedagogy careers (standards and accreditation criteria), implies greater resources to implement adjustments and generate denser study programs. On the other hand, "if the level of pedagogy students remains less demanding, this also impacts the amount and diversity of support mechanisms that universities must give these students to ensure a successful academic progression." In addition, he stated that territorial differences in the training of students should be considered.

In this scenario, he assured that this issue requires "a more reflective look, which incorporates those variables that are not being considered and that have a direct impact on teaching work."

Rector Zolezzi presented to the commission led by Senator Jaime Quintana (PPD) an analysis prepared by the CRUCH and which addresses the impact and trends of the application and selection process for pedagogy careers, focused on admission 2021.

According to these data, there was a decrease in 22% in students with an interest in this area in 2021 compared to the previous period. This implies that, while in 2020 there were 22,137 students who applied -at least- to a pedagogy, this year only 17,158 applicants did. On the other hand, there was a significant decrease in applications for these first preference programs: while in 2020 these were 10,654, this year they decreased to 7,557 (29%).

Additionally, those selected in these careers fell by 29% compared to the previous period, going from 12,862 in 2020 to 9,330 in the process this year. Meanwhile, vacancies not completed in 2021 are double those of the previous year: while 2,257 regular vacancies were not filled in 2020, this year 4,430 remained unfilled.

The rector of the Metropolitan University of Education Sciences (UMCE), Elisa Araya, also participated in this Wednesday's session of the Education Commission, who stated that “we believe that the education and training of new teachers should be seen from a in a more systemic way and what is appearing on the scene is a more complex and in-depth reflection of the effects of public policies in recent years ”.

The rector Araya warned that “the students who enter Pedagogy do so with a vision of the country, a very great political and social commitment. But that is not enough, because even having a lot of will, what usually happens is that the school is also a restricted space, with a series of limitations for innovation ”. In addition, he argued that "we need very sustained public policy support for teacher training schools, this has to be noted in financing and flexibilities."

He also spoke before the instance and the president of the Council of Deans of the Faculties of Education of the Council of Rectors (CONFAUCE) and dean of the Faculty of Education of the Catholic University of Temuco, Juan Mansilla, who addressed various difficulties faced by teachers in working life and the effects this has on professionals and educational communities.

The bill that proposes that the entry requirements to careers and pedagogy programs established in the third paragraph of transitory article 36 of Law No. 20,903 be enforceable until 2025. It also proposes to replace the conditions of access to pedagogies currently indicated in the Article 27 bis of Law No. 20,129, for those conditions currently set forth in the fourth paragraph of transitory Article 36 of Law No. 20,903. Meanwhile, the project seeks to maintain the current income requirements, which were originally only in force until 2022, extending them until 2025.

Presentation of Rector Zolezzi before the Senate Education Commission

Check here the session of the Senate Education committee