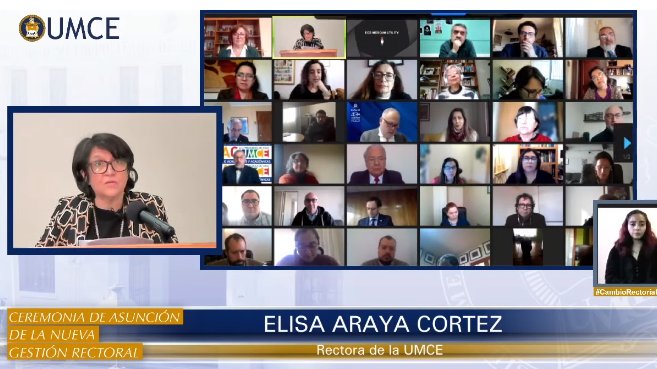 UMCE Rector Elisa Araya Cortez: «After 132 years of existence, it is the first time that a woman arrives at the Pedagogical School»

The inauguration ceremony of the new rectory management was broadcast live to the entire community.

«I understand this path as a historical moment. After 132 years of existence, it is the first time that a woman comes to the Rectory at the Pedagogical School, a teacher, a former student. I am one of the first three women to assume this high position of responsibility in the State Universities ", were part of the words of Professor Elisa Araya Cortez, after becoming the first Rector of the Metropolitan University of Education Sciences (UMCE) , for the period 2021-2025.

In the traditional ceremony of assumption of the new rectorial management, which was broadcast live through the YouTube channel UMCE and UESTV signals, more than 500 people, among whom were the rectors and rectors of the Universities of Playa Ancha, Patricio Sanhueza; from Chile, Ennio Vivaldi; from Valparaíso, Osvaldo Corrales; from La Frontera, Eduardo Hebel; from Aysén, Natacha Pino; as well as the elected rector of the Technological University of Chile, Marisol Durán; together with Emilia Ríos, mayor of Ñuñoa, and Joel Olmos, mayor of La Cisterna.

The Rector Jaime Espinosa Araya, upon handing over the position, expressed his «best wishes for good success in his tenure. I am sure that our university community will know how to provide the necessary support for the achievement of the objectives that it has proposed to direct the UMCE through the horizon of academic and institutional development that it deserves, in the same way as, for the most part, it chose it as its Rector ». He also expressed his "deep gratitude to all who accompanied me with generous disposition and professionalism in this noble university task."

Rector Araya highlighted the important role that women have played throughout the history of education. «I do not come to this position alone, a long list of women fighters, educators, have preceded me. I bring with me the inheritance that women like Bridget Walker, who at the beginning of the nation formed the first Normal School of Preceptors with the purpose of preparing primary school teachers; Amanda labarca, educator, feminist, first female academic of the University of Chile, with a prolific academic production still in force; Gabriela Mistral, a poor student, as so many of us were, expelled and discriminated against by the school, whose reentry as a teacher was not exempt from personal pain; Viola Soto, Chilean educator, winner of the National Education Award, who was also Vice Chancellor here at UMCE; Nolfa Ibanez, a distinguished educator who has been proposed by our community to receive the 2021 National Education Award. They are just some of the most notable, of a very long list of teachers, researchers and academics, who have given themselves with energy and intelligence to the task to educate. They are for us, more than ever, the strength and inspiration we need, "he said.

The highest authority of the UMCE raised the importance of the work of each and every member of the community. «I am clearly aware of the size and difficulty of the task I undertake and of the community's expectations for a change towards better days. They have placed in my heart a feeling of commitment and duty that I will not shirk. I will be guided by the commitment and determination for the University and, above all, the commitment to social justice that the entire country demands. But I am not alone in this task. A team of academics and professionals, with skills and desire to carry out and carry out what is committed in our program. The community also accompanies me, because no one is left over, we all need each other, "he said. 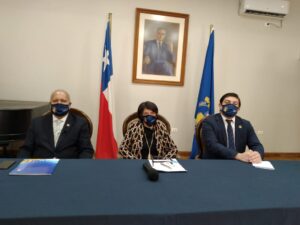 He also referred to the challenges, such as the Self-Assessment process with a view to institutional Accreditation. «There is what is urgent and what is important: we know that our future has been marked by the need to obtain accreditation, which has been accomplished in increasingly shorter and more pressing time cycles. We need to get accredited now for as long as possible, to be able to walk on our own feet, autonomously and showing institutional maturity. And for this, we require the entire community, "he added.

Reflecting that spirit of unity, the UMCE community was part of this historic moment, sharing his wishes for the University in this new stage. Through a video, students, academics and officials expressed their good wishes.

Also there were present, with emotional greetings of support, figures from the world of education and culture: Carlos Díaz, from the College of Teachers of Chile; Raúl Zurita, poet and National Prize for Literature; and Roberto Márquez, musician, composer and vocalist from Illapu.

At the closure, The Rector of the UMCE expressed her wishes for the management that she will lead "We must aspire to be us, the UMCE, with our history, who contribute to the recovery of public education, universal, egalitarian, inclusive, non-sexist, environmentalist, democratic and citizen," he said. After reading the poem "The pleasure of serving", by Gabriela Mistral, he concluded his words with a call: "Dear UMCE community, I invite you to serve our University today."

The emotional ceremony concluded with the symbolic delivery of the keys to the Rectory building.

First rector of the UMCE

The Rector Elisa Araya is a Physical Education teacher, psychomotor, and Doctor of Educational Sciences, with training in Pikler Pedagogy. She developed and delivered a training program for directors and supervisors in integration pedagogy (based on a competency curriculum) in the Republic of Angola, as a consultant associated with the Bureau d'Ingénerie en Education et Formation (BIEF-Belgium) between the years 2009-2013.

She was director of the Extracurricular Education Department of the Chilean Ministry of Education (2004-2007), dealing with school physical education policies in the country. He has provided consultancy services to various state agencies, including MINEDUC and JUNJI, in matters related to play and creativity in early childhood.

You can relive the ceremony on the YouTube channel UMCE https://www.youtube.com/watch?v=HjRteIuHJ3Y