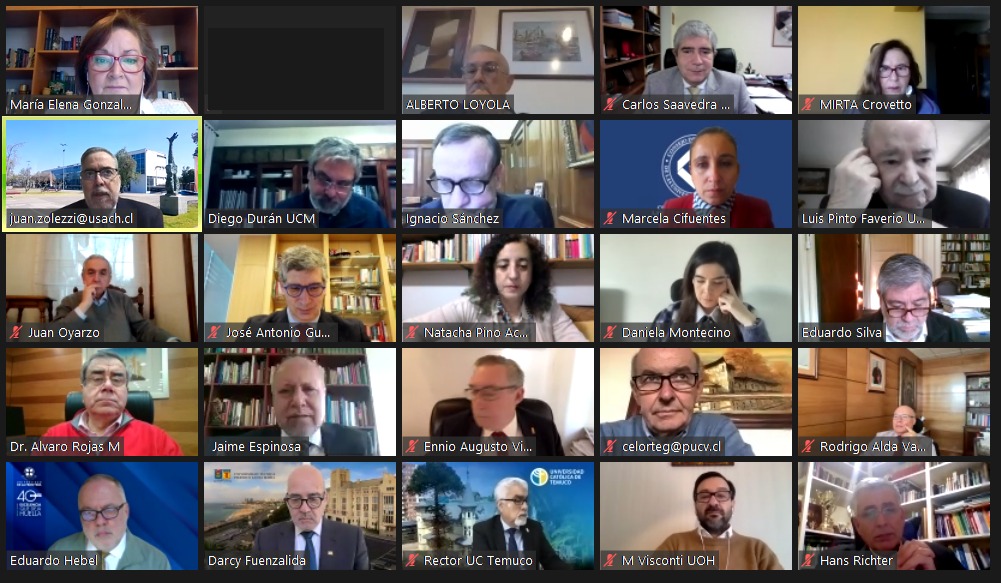 Council of Rectors welcomes the new authorities of the U. Católica de la Santísima Concepción and the U. Austral de Chile

The rectors Christian Mellado and Hans Richter participated today for the first time in the plenary session of the Council, after assuming during this month the rectories of their universities.

With an invitation to work collaboratively, the executive vice president of the Council of Rectors of Chilean Universities (CRUCH), Juan Manuel Zolezzi, welcomed Christian Mellado Cid and Hans Richter Becerra, new governing authorities of the U. Católica de la Santísima Concepción and the U. Austral of Chile.

The rectors joined the plenary session of the Board today, which today held its ordinary session No. 624. In this context, Rector Zolezzi said that “we hope that they will be able to fully integrate and as soon as possible to all our activities. I have felt that, in complex moments, one feels support to be participating in the Council ”.

Both academics appreciated the welcome. Christian Mellado stated that “it is an honor to be part of CRUCH and to contribute. Count on me in what you consider necessary and in what this Council considers relevant, beyond my obligations as rector ”.

Meanwhile, Hans Richter appreciated the opportunity to work with the members of the Council. "I have known some of you before and that facilitates a quick connection, not only within the CRUCH, but also between institutions." 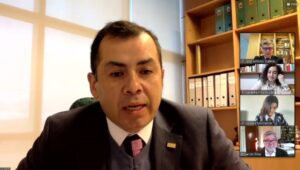 Christian Mellado assumed the UCSC rectory on June 2, replacing Christian Schmitz. It is Ph.D. in Business Administration (Major Finance) from the University of Texas Pan-American (since 2015 University of Texas Rio Grande Valley), United States; Master in Administration (MBA) from the University of Chile and Commercial Engineer (1996 class) from UCSC. In 2003 he joined the Faculty of Economic and Administrative Sciences (FACEA) of the same house of studies, where he served as head of the Commercial Engineering career, academic director of the Master of Business (MBA), academic secretary and dean. 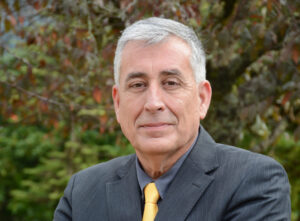 Hans Richter took office on Friday, June 18, succeeding rector (s) Óscar Balocchi. He has developed a long career at UACH: he has a degree in Biochemistry (1994) from the university and a doctorate in Cellular and Molecular Biology from the same institution. He has been an academic at the Faculty of Medicine, director of the Institute of Anatomy, Histology and Pathology, director of Research and Development and the last two years he was the first Vice-Rector for Research, Development and Artistic Creation of the UACh.

Farewell to rectors Pinto and Espinosa

During the same session the rectors of the U. Tecnológica Metropolitana, Luis Pinto Faverio, and the U. Metropolitana de Ciencias de la Educación, Jaime Espinosa Araya, received recognition from their peers, because they will leave their positions next month.

The executive vice president of CRUCH assured that "there is deep appreciation for his invaluable contribution to the Council of Rectors and the strengthening of higher education in the country." His words were joined by other university authorities, who highlighted the role that Pinto and Espinosa have played in the internal debates of the Council and on national issues.

During the meeting, the Rector Pinto stated that “unfortunately the deadlines are always reached and today it is essential to thank the tremendous honor that I have had for 20 years working in the Council of Rectors, which has allowed me to see its evolution and how it has been changing. For me it has been a tremendous school to be at CRUCH ”.

Meanwhile, the rector Espinosa said that "I want to thank everyone for the friendship they gave me, the companionship, the generosity when sharing their experiences and the learnings that I received from you and that they helped me to fulfill my duty. rector. You don't study to be a rector, but here you learn to be one and your convictions are reinforced ”.

Luis Pinto is an agronomist from the University of Chile (1961) and later, in 1974, he graduated from the Master's program in Agricultural Economics, Political mention and Agricultural Development, from the Catholic University. He has been rector of the UTEM for several periods: he was the first rector of the constituted house of studies, between 1993 and 1994; Then he was re-elected in office until 1999 and in 2009 he was again elected as the highest authority, with re-elections in 2013 and 2017, a period that lasts until July of this year.

In addition, in this Thursday's session, the full Board reviewed an Evaluation of the Admission Process 2021, prepared by the advisory committees of the CRUCH for Admission and Enrollment and the Academic Vice-Rectors, together with the Undergraduate Network. The academic Juan Mancilla, dean of the Faculty of Education of the Catholic University of Temuco and president of the Council of Deans of the Faculties of Education of the National Council of Rectors (CONFAUCE) also participated, who addressed the Bill that modifies the requirements of entrance to Pedagogies and situation of these careers in the CRUCH.