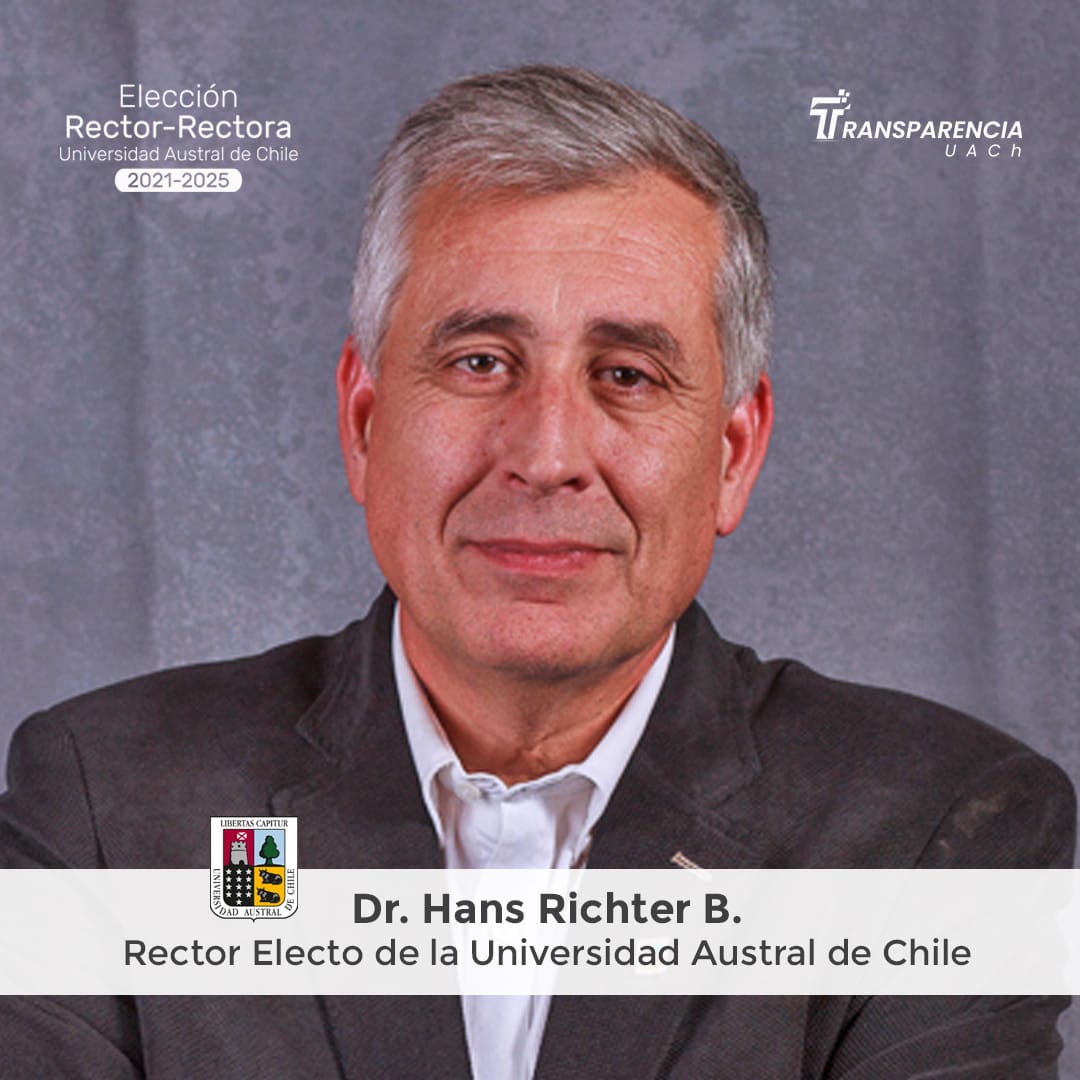 This Friday, June 18, at 11:00 am, the proclamation of the new authority will be held by the Higher University Council, a ceremony that will be broadcast on the multimedia platforms of Radio UACh.

The new rector stated that "we must definitely continue working collectively for the purposes that should lead us to a substantive change."

Dr. Hans Richter Becerra was elected the new Rector of the Austral University of Chile for the period 2021-2025. With 294 of the votes, she surpassed Dr. Maite Castro Gallastegui in the second electoral round, who obtained 271 preferences, a process that was carried out electronically today, Wednesday, June 16. In addition, 13 white votes and 10 invalid votes were counted.

In its first words after the election, the elected authority highlighted the high degree of participation, indicating that community support is essential.

Likewise, he stated that they will collect proposals from the other candidates, indicating that “we will have to work to incorporate the ideas and consolidate the programs in all the points that are relevant, in such a way that all members of the community feel represented. and we can move forward with great force ”.

He also commented that this election "is a huge, very promising opportunity to unify criteria and definitely continue working collectively for the purposes that should lead us to a substantive change."

Regarding his team, he publicly thanked the work of Dr. Mylthon Jiménez -who was empowered by the candidacy- and Dr. Galo Valdebenito. Likewise, he announced that Dr. María Angélica Hidalgo will assume the Academic Vice-rectory, while Dr. Constanza Angulo will take charge of the Student Affairs Directorate and Prof. Sandra Bucarey, the Undergraduate Studies Directorate, emphasizing “that it is the master gear of what we have to do in the next four years: advance towards an undergraduate degree of excellence ”.

In turn, Dr. Maite Castro expressed that “this is a special moment, indeed personal, but I also believe that it is a moment to share with the community what we are experiencing. First of all, of course, I would like to congratulate the new Rector-elect, many congratulations Hans, congratulations also to the team that accompanied you throughout the campaign, to the team that will accompany you in the coming years in the Rectory. We wish you all the success from me and from the entire team that worked with me and we wish you all the success and we also invite the entire community to continue working for the University and to continue supporting the projects that this Rectory is going to propose so that we can build a University Austral de Chile as a whole ”.

During the day a special transmission was broadcast through Radio UACh 90.1 FM (Valdivia), Facebook Live, YouTube, signal 52 (SD) and 843 (HD) of Telefónica del Sur. By these same means, the results were announced after 6:00 p.m.

After 6.13 pm, the electronic ballot box was opened, which was in charge of the general secretary, Dr. Jordi Delgado, together with the representatives of the Elections Qualifying Commission. The official minutes were read by the professor and secretary of this commission, Dr. Gabriel Morán, who congratulated Dr. Richter “for his success; he is already elected rector ”.

Dean Dr. Claudio Flores (representative of the Academic Council in this commission), stated that it is “probably one of the most important days in the history of the university, congratulating the winner of the election, without a doubt I believe that the programs they transcend beyond the people and that the University is the one that wins ”.

While the tenured professor, Dr. Humberto González, stated that “this constitutes an important milestone within the University, we are very happy for the participation and for how the community in general has shown its interest and we hope that this is the beginning of a new chapter for the University ”.

The commission was also made up of Fernando Schultz Oettinger (representative of the Board and who chairs it), in addition to the titular professor Patricio Valdivieso, while, as alternates, there are professors Andrés Iroumé, Rubén Pulido and Tom D. Dillehay.

In the special transmission, the rector (S) Dr. Óscar Balocchi, stressed that “we have resumed our path, today we have a democratically elected Rector according to our statutes with all the support that the university community gives him. Because at this moment the candidatures ended, the election process ended and today the entire university and all the academics are behind our Rector to support him and move forward with our beloved Austral University of Chile ”.

For his part, the Chairman of the Board, Francisco Luzzi, expressed his congratulations to Dr. Hans Richter, "I am convinced that he is going to be a great Rector for the Austral University", adding that "the programs are enriched as more people participate and Soon I can imagine, starting this Friday we will begin to work and as a member of the Board of Directors we offer all our support so that we can move forward in this process and have a better University soon ”.

Meanwhile, the Secretary General, Dr. Jordi Delgado, said that the process “has developed in a very successful way and that everyone who has wanted to have been able to vote and that I believe has been a vote with a high participation, with which I believe that we can all also be more than satisfied by the same ”.

His training in high university management in international networks of CINDA and IGLU; Together with his participation in national accreditation commissions of CNA programs, the FONDECYT Study Group and as vice president of the CRUCh Science, Technology and Innovation Commission for seven years, they support the experience and passion that he makes available to assume the next Rectory .

The elected Rector will be proclaimed this Friday, June 18, at 11:00 am, in a solemn session of the Higher University Council, thus initiating his mandate for the next four years.

The ceremony will be broadcast by Radio UACh through the 90.1FM dial, Facebook Live, YouTube and the signal 52 (SD) - 843 (HD) of Telsur.