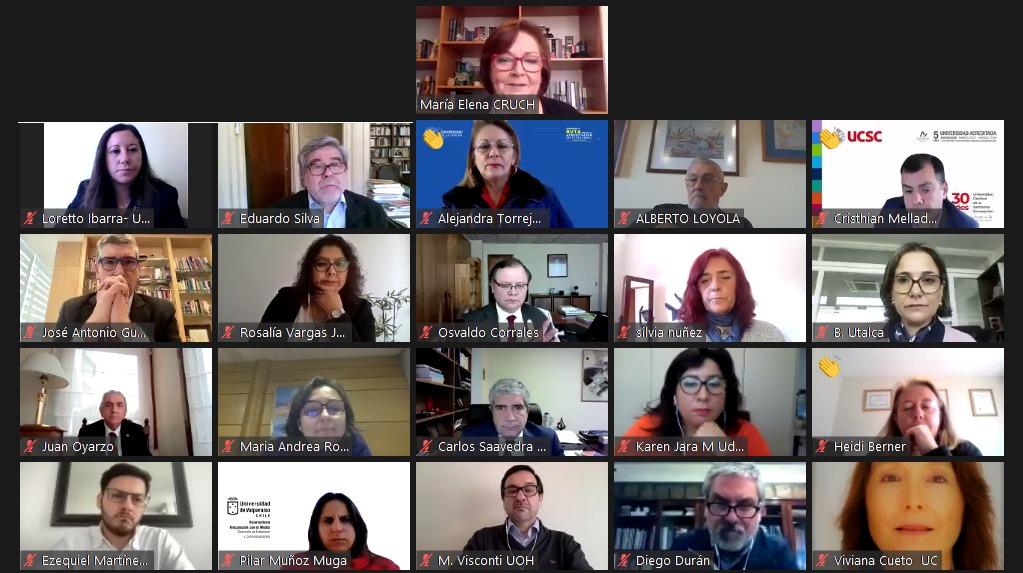 The executive vice president of CRUCH appreciated the willingness and commitment of the Council "to put the capacities and resources of our institutions at the service of people and territories."
For her part, the general secretary of the Council of Rectors detailed the lines of action of the CRUCH during 2020, highlighting the contributions to the higher education system, the fight against Covid-19 and the contributions to the constituent process underway.

With a significant attendance of rectors, presidents of commissions, academics and professionals of the different universities that are part of the Council of Rectors of Chilean Universities, this Monday, May 31, the Participatory Public Account of the General Secretariat of the CRUCH.

On the occasion, the executive vice president of CRUCH, rector Juan Manuel Zolezzi, pointed out that “2020 was a difficult, complex year, in which we experienced the effects of the social outbreak and the pandemic. The impact has been felt in all aspects of life, which has generated the need to rethink things in the face of this new reality. We have had to respond to the new needs of students, academics and officials of our different university communities ”.

In this context, Rector Zolezzi highlighted the willingness and commitment of the Council "to put the capacities and resources of our study houses at the service of people and territories." He also valued "the importance of collaborative work between all CRUCH universities to face these difficulties and generate new ways of working, not only for the institutions, but also for the country."

Regarding the role of the General Secretariat of the CRUCH, the executive vice president highlighted its importance, “not only as a body responsible for articulating, coordinating and monitoring the different initiatives and actions of the CRUCH, but also as a propositional body and generator of proposals. and initiatives that contribute to the work of the Council ”.

The General Secretary of the Council of Rectors, María Elena González, introduced the Public Account highlighting that the CRUCH and its universities share values and principles such as “universality, respect for diversity, pluralism, search for the common good and the inherent commitment to the public. ”. He also recalled that the CRUCH was created by law in 1954 and that at present it is made up of the rectors and the rector of the 30 most prestigious universities in Chile.

Subsequently, he referred to the impact of the health and social emergency, and described how the Council of Rectors addressed the various needs and problems that emerged as a result of the pandemic. He highlighted the collaborative work to sustain the continuity of higher education; meet the needs of equipment and connectivity; promote measures aimed at making students and their families more flexible and facilitating the fulfillment of financial commitments; safeguard the sustainability of the universities and the protection of the members of the university communities; as well as putting the resources of the universities at the disposal of the national emergency, through laboratories, research centers, experts and professionals from the different health areas.

Contributions to the Higher Education System

María Elena González specified that the CRUCH had contributed in different areas relevant to the operation of the higher education system with the preparation of reports, documents and analyzes. Among them, he mentioned the contributions to the new Access System, in charge of the Undersecretariat of Higher Education; the National Accreditation Commission (CNA); as well as in different instances related to Science and Technology.
Regarding financing, he highlighted the active participation and demands of the CRUCH in the discussion of the Higher Education Budget 2021; regulated fees and the determination of vacancies; and the use of surpluses from the 2020-2021 University Credit Solidarity Fund, among others.

Strengthening of the CRUCH commissions

During the period, the work of the CRUCH advisory committees was strengthened, creating two new ones and integrating a rector or rector to each of them, with the purpose of favoring articulation with the full Board.

The role of the commissions, in which representatives of the 30 universities in specific areas participate, is to prepare analyzes and generate substantive proposals for the various discussions of higher education. Currently, there are 11 commissions: Academic Vice-Rectors; Postgraduate; research; of Internationalization; Gender Equality; Admission and Registration; of Libraries; Economic; Legal; and the Quality and Institutional Analysis commissions, created in March 2021.

At the international level, the different bodies with which the CRUCH maintained links or developed joint initiatives during 2020 were named: the Nansen Center for Peace and Dialogue in Norway; the Observatory of European Union - Latin America Relations, OBREAL-GLOBAL; the renewal of the agreement between Fundación Carolina and CRUCH (to grant scholarships in doctoral programs and short research stays); the Congress of the Americas on International Education, CAEI, 2021; and the Mimir Andino Project: Innovation and Research Management (led by the Colombian Association of Universities, OBREAL, the Council of Rectors and various Latin American and European universities).

Greater visibility of CRUCH and its universities

To give greater visibility to the public roles of CRUCH, as well as to the 30 universities that make it up, work was done on the design of a new website, which was released in mid-May of this year.

Likewise, during the period, the General Secretariat promoted the creation of two websites to publicize the initiatives of the universities. In the first, the various actions in the field of health emergencies were systematized (https://covid19.consejoderectores.cl/) and, in the second, in the scope of the Constituent Process, from 2019 to date (https://procesoconstituyente.consejoderectores.cl/).

At the end of her speech, María Elena González thanked the support and collaboration provided during 2020 by the rector and rectors, the members of the advisory committees of the CRUCH, the technical teams of the Consortium of State Universities of Chile (CUECH), the Agrupación Regional Universities (AUR) and the Network of Non-State Public Universities (G9); together with the management and administration teams of the 30 CRUCH universities and those who make up the General Secretariat. González stated that these people and organizations showed that "despite the difficulties, the adverse context, how the pandemic has hit people, places and institutions, it is also possible to generate life, beauty and hope."

The Participatory Public Account 2020 of the Council of Rectors is available at this link. 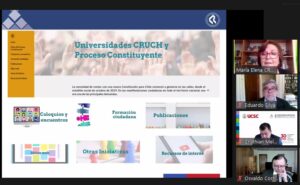 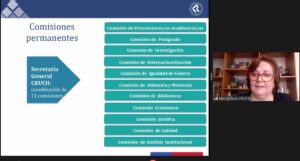