Council of Rectors, Ministry of Justice and Gendarmerie establish an alliance to promote social reintegration of persons deprived of liberty

The executive vice president of the Council of Rectors, the Minister of Justice, the Undersecretary of Justice, and the director of the Chilean Gendarmerie, signed a collaboration agreement this afternoon.

Thanks to the agreement, people deprived of liberty in the process of social reintegration will be able to access training places and seminars at CRUCH universities.

This afternoon a collaboration agreement was signed between the Council of Rectors of Chilean Universities (CRUCH), the Ministry of Justice and Human Rights (MINJU), and the Chilean Gendarmerie, with the purpose of developing activities that favor effective access by people deprived of liberty in the process of social reintegration, to training spaces at CRUCH universities.

The signing was carried out this Tuesday, May 26, at the offices of the Ministry of Justice, with the participation of the executive vice president of CRUCH, Juan Manuel Zolezzi; the Minister of Justice, Hernán Larraín; the undersecretary of Justice, Sebastián Valenzuela; and the national director of the Gendarmerie, Christian Alveal.

On the occasion, Rector Zolezzi said that "when we commit ourselves to this agreement, we are establishing the disposition of the Council of Rectors to attend to all those people who want a reintegration, who want to be trained and educated."

The executive vice president of CRUCH added that “we hope that this agreement will have the broadest possible scope. On the part of higher education institutions there is the best availability ”.

For his part, Minister Hernán Larraín stated that "I thank the Council of Rectors, for having understood and had the sensitivity to open this opportunity." The Secretary of State affirmed that this initiative “is called to achieve a very radical change in the coming decades so that, effectively in this way, we not only give a genuine opportunity to those who have been deprived of liberty, but also collaborate in reducing recidivism ”.

Scope of the agreement

The agreement establishes that the parties involved will carry out cooperation activities aimed at promoting the social reintegration of people who have served or are serving a sentence. In this way, courses, careers or programs can be implemented within prisons; grant special places and / or scholarships; promote seminars or research projects in the field of social reintegration; and, also, to promote the realization of professional practices of students of universities of the CRUCH in Gendarmería de Chile.

Within the framework of the agreement, the CRUCH will collaborate in the articulation between the universities and the counterparts (MINJU and Gendarmería), for the signing of specific agreements; it will guide the Gendarmerie and the regional secretariats of MINJU regarding the available programs; will participate in the stage of evaluation of the results of the agreement, providing information and providing academic criteria; among other commitments.

It should be noted that this agreement is part of the objectives of the + R Program promoted by the Undersecretariat of Justice, which seeks to contribute to equal opportunities for people deprived of liberty in the process of social reintegration.

To do this, one of the focuses of the program is to generate strategic alliances with higher education institutions in order to strengthen the programmatic offer in the field of education, in order to contribute to the reduction of criminal recidivism. 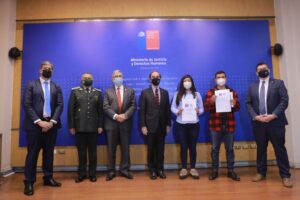