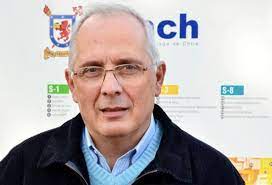 The academic and researcher at the University of Santiago, as well as director of the Unesco Chair of Inclusion in University Higher Education, died this Tuesday, March 3, at dawn. It is considered a benchmark in the field of equity in education and recognized for its invaluable contribution in the design and implementation of public policies for the improvement of access systems to higher education.

The Council of Rectors of Chilean Universities (CRUCH) expressed its regret for the death of Francisco Javier Gil Llambias, Doctor of Science, academic and researcher at the University of Santiago de Chile (USACH), as well as director of the Unesco Chair of Inclusion in University Higher Education, and recognized his invaluable contribution in the design and implementation of public policies for the improvement of access systems to higher education.

The executive vice president of CRUCH and rector of the University of Santiago, Juan Manuel Zolezzi, said that “the death of Francisco Javier Gil is a tremendous loss for Chile. He was a person with a strong commitment to fairness and inclusion. His invaluable contributions effectively enabled talented students to overcome obstacles and access higher education. "

Francisco Javier Gil, who died this Wednesday, March 3 at dawn, is considered a benchmark in the field of equity in education and recognized for his contributions in initiatives that contributed to promoting inclusion in Chilean higher education.

Among the projects he led include the Scholarship for Academic Excellence (BEA), the Propedeutic programs that have been implemented in various universities in the country, and which gave rise to the Program of Access and Effective Accompaniment (PACE) of the Ministry of Education and the program Ranking 850, among others.

Meanwhile, in the Council of Rectors he actively participated in the Single Admission System and, very especially, in the Ranking Commission of Notes between 2013 and 2018.

As a researcher, he was director of projects with internal financing, FONDECYT financing and international financing, directing doctoral, master's and undergraduate theses.

Likewise, he represented the USACH in various instances: he was academic representative of the Faculty of Science in the Academic Council (1985-1986); President of the Board of Directors of the Academic Senate (1989-1990); Dean of the Faculty of Science (1990-1996); President of the “University Reconciliation Commission” (1991); Vice-rector for Teaching and Extension, (1998-2000); representative of the USACh and Coordinator of the Project “Universidad Construye País” of the Fundación Participa (2002-2004); member of the Board of Directors of the Dr. Alberto Zanlungo Foundation (2002-2008); director of the USACH Baccalaureate Program (August 2007-December 2009); and UC and USACH inclusion policy coordinator.

In addition, he was rector of the Cardenal Raúl Silva Henríquez Catholic University (January 2010 October 2011), as well as founder and president of the International Center for Equity and Inclusion in Higher Education (CINESUP).

On the other hand, he was director of the Chilean Chemical Society (1982 to 1983) and its vice president until 1984; President of the Council of Deans Faculties of Natural and Exact Sciences of Chile (1993-1996); advisor to the Ministry of Education of Chile (MECE Program) in the formulation of the "Fundamental Objectives and Minimum Contents" in Chemistry 1996-1998; CNAP evaluator (2003); Executive coordinator of the Academic area of the Vicaría Pastoral Universitaria del Arzobispado de Santiago, (2002-2003); representative of the President of the Republic of Chile on the Board of Directors of the Metropolitan University of Education Sciences (late 2007 to January 2010); member of the Justice and Peace Commission of the Archdiocese of Santiago de Chile (2008-2011); and president of the Catalysis and Adsorption Division of the Chilean Chemical Society (2006 to 2011).

In 2016 he received the Jorge Millas Award, awarded by the Austral University of Chile (UACH) to those who have contributed in a notable way with their intellectual work and their life to ennoble and develop the university institution or higher education.

Those who wish to send their condolences, or share a message, the family has enabled the email elviajedejaviergil@gmail.com.