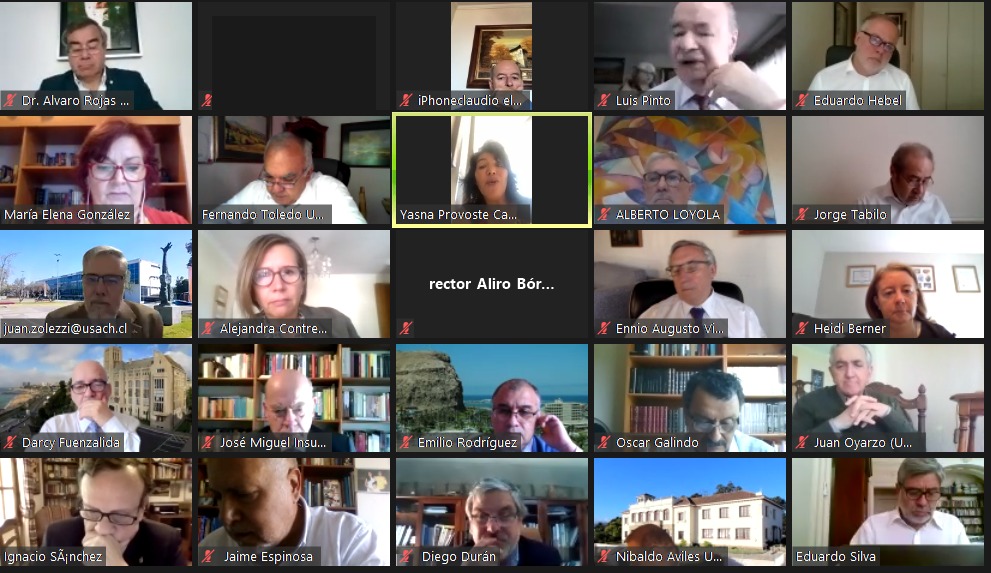 At the plenary session on Thursday, November 26, Senator José Miguel Insulza and Senator Yasna Provoste were present, representing the group of parliamentarians who have supported the universities of the Council of Rectors.

Regarding the budget discussion, the executive vice president of CRUCH, Juan Manuel Zolezzi, said that “we hope to have good news between now and Sunday; things are going better now than they were a couple of days ago ”.

The Council of Rectors began its session today with an act of thanks and recognition to all the parliamentarians who have supported the universities during the discussion of the 2021 Budget for Higher Education.

On behalf of the parliamentarians, Senator José Miguel Insulza and Senator Yasna Provoste were present, to whom the executive vice president of CRUCH, Juan Manuel Zolezzi, gave the most cordial welcome and stated that “we have felt the support , the closeness, close communication and concern of parliamentarians for the same issues in which the Council of Rectors has been concerned and busy in this period. Faced with this, they have been on our side, supporting us, for which we appreciate their commitment to our institutions ”.

Senator Insulza, along with thanking the rector Zolezzi for his words, pointed out that the discussion of financing for Higher Education "will probably be extended until the weekend." He explained that, although there are still no figures, it was not until early morning that "we had some proposals on where to obtain resources to solve the problems raised, fundamentally in two items of the game, the baseline fund and also the strengthening of Higher Education" .

For Insulza, it is necessary to "make citizens aware that public education, the largest universities and regional universities are being strongly attacked and we have to raise awareness about this not only now, but throughout the year." To advance in that direction, he proposed "to continue working on this, which in my opinion is a very dramatic issue in higher education in Chile."

Senator Provoste, on the other hand, appreciated the joint work that has been carried out for more than 50 days and especially thanked "all the technical team of the universities that have worked with all our teams, which has allowed us to make a common front of support and defense of our universities ”. He also stressed that “everyone has been taking a very important leadership, the CRUCH, the CUECH, the G-9, the AUR, each of you was contributing to the issues that needed to be corrected. Finally, he expressed that "our universities are world class and today they require more support and not attempts to weaken it as we have seen in this budget proposal that until we remove it from Congress we cannot lower our guard."

In this regard, Rector Zolezzi reiterated the gratitude of the CRUCH and said that “we hope to have good news between now and Sunday; things are going better now than they were a couple of days ago ”.

The rector of the Pontificia Universidad Católica de Chile and alternate vice president of CRUCH, Ignacio Sánchez, along with appreciating the support of the group of parliamentarians who have supported "the cause of higher education, science and knowledge in the country" , highlighted the work of the universities during the health emergency. "We have been contributing in health, education, ethical guidelines, mental health, traceability, data management, employment, economic proposals, in the situation of camps," he said. For this reason, “it is completely incoherent that the budget proposal set aside all these situations. In a period where more universities, more science, more innovation and more knowledge are needed, we should have expected investment to increase, as well as support different from what we have seen. That is why I want to acknowledge the vision, passion and courage that you have had to carry out this process, to carry the banner of the university, of knowledge and of the expression of science, humanities and art in our country ”, he concluded .

The rector of the University of Chile and president of the Consortium of State Universities of Chile (CUECH), Ennio Vivaldi, said that “more than what you have done for the universities directly, I think the contribution that you have made indirectly is more important. , by the level with which they have raised problems ”. He argued that “for us as universities it is very important to say that for this country it is very important to rethink the productive matrix (…). And if we talk about the future of the country we want, with that alone we are already giving it enormous importance and we are highlighting the role that universities have to play. I believe that the debate that you gave, very clear and if you like in a very new way, had that character. We have to rethink the university model ”.

In the same sense, the rector of the Universidad Católica del Maule and president of the Non-State Public Universities (G-9), Diego Durán, in addition to thanking the work that is being done today in Parliament, stated that “it is also It is important to point out that there are many things that a Budget law probably cannot solve, nor can it definitively give a different direction to higher education and education in general terms in the country. A large-scale discussion in the country is very necessary (…) that allows us to visualize a longer path of higher education. It cannot be that with the nation's budget we are discussing proposals or conceptual elements that define higher education and that are limited many times, almost exclusively to the four-year duration of a government. That does a tremendous damage to the institutions ”.

Meanwhile, the rector of the University of Playa Ancha and president of the Regional University Association (AUR), Patricio Sanhueza, who coincided with the recognition of the parliamentarians, asserted that "the higher education model in Chile is anti-regional, because it is a model that subsidizes demand and by subsidizing demand, it subsidizes the number of students that a university is able to enroll and obviously there are territories where this is not fulfilled in any way ”. He argued that in the various territories of the country, universities must face adverse factors, such as poverty, low population, geographic isolation, lack of connectivity, "that is, there are a series of situations that regional universities have to assume and, even more, gaps important in the prior training of students, which means higher cost for universities ”. Faced with this, the rector Sanhueza proposed to create instances where it can be deepened in this regard, “in order to move towards a financing model for higher education that is more balanced and more equitable with the diversity and territorial inequality that this country has. ”.