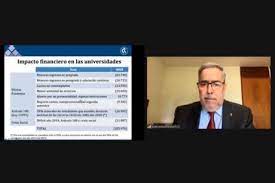 Executive Vice President of the Council of Rectors: "It is a very encouraging sign for our universities that they have voted against the 2021 budget for Higher Education"

The Fourth Mixed Subcommittee on Budgets rejected the proposal presented by the Undersecretariat of Higher Education corresponding to expenses not established in permanent laws for Higher Education for the year 2021.

"It is a very encouraging sign for our universities that they have voted against the 2021 budget for Higher Education, as it reveals that parliamentarians have understood the seriousness of the proposal presented by the Ministry of Education," said the executive vice president of CRUCH and rector of the University of Santiago, Juan Manuel Zolezzi, when referring to the vote of the Fourth Mixed Subcommittee on Budgets that rejected -by three votes against and one in favor-, the proposal presented by the Subsecretariat of Higher Education corresponding to the expenses not established in permanent laws for Higher Education for the year 2021.

In the opinion of Rector Zolezzi, the proposal “did not take into account the significant contribution of the universities of the Council of Rectors to face the health crisis that the country has experienced, nor the difficult financial situation in which the universities find themselves as a consequence of the same pandemic ”.

In this context, the Undersecretary of Higher Education requested to have a "dose of realism", before which the rectors agreed in stating that during the pandemic the CRUCH universities have complied with the country and its students and, despite the financial impact and the lack of support from MINEDUC has given continuity to university functions. Also, that the 30 CRUCH universities have been key agents in the health network and in the economy of all regions and have had –and have- effects on thousands of providers, SMEs and workers.

For the rector Ennio Vivaldi, “in times of crisis and in the search for economic recovery, increasing resources to the public university system is to finance the development of the country as a whole. Not to do so is to condemn ourselves to the inability to adequately face situations as tragic as those we have experienced during the last year ”.

In the proposal, this decrease is justified by the increase of 6.8% in the resources allocated to Gratuity. However, this increase is due to the incorporation of new higher education institutions to this policy.

In this regard, the executive vice president of CRUCH was critical and said that "this increase cannot be at the expense of reducing and eliminating other items from the higher education budget." For his part, Rector Vivaldi asserted that “this contradicts the principle contemplated in Law 21,091, which establishes an objective mechanism to expand Gratuity, based on the macroeconomic conditions of the country. Thus, it was assumed that all progress in Gratuity would be made with new resources and not with budgetary redistributions ”.

During the discussion, Senator Yasna Provoste pointed out that “the 2021 budget harms the public university system,” adding that the proposal “reduces institutional contributions; it equates the treatment of public institutions to the private system; it does not take charge of the effects of the pandemic and relies on the gratuity without correcting any of the operational problems that have been identified ”.

Finally, the rectors, aware of the country's situation, proposed various measures, such as: reestablishing institutional funds -basic funds, agreements and national interest funds- according to the values assigned in 2020, which in practice amounts to a decrease 2.6% real; allow the use of the total funds accumulated from the University Credit Solidarity Fund, which does not imply new expenses; suspend the application of the tariff regulation; to set up a special fund to support CRUCH universities or low-cost credits with a state guarantee; and do not consider the year 2020 for the calculation of Gratuity.