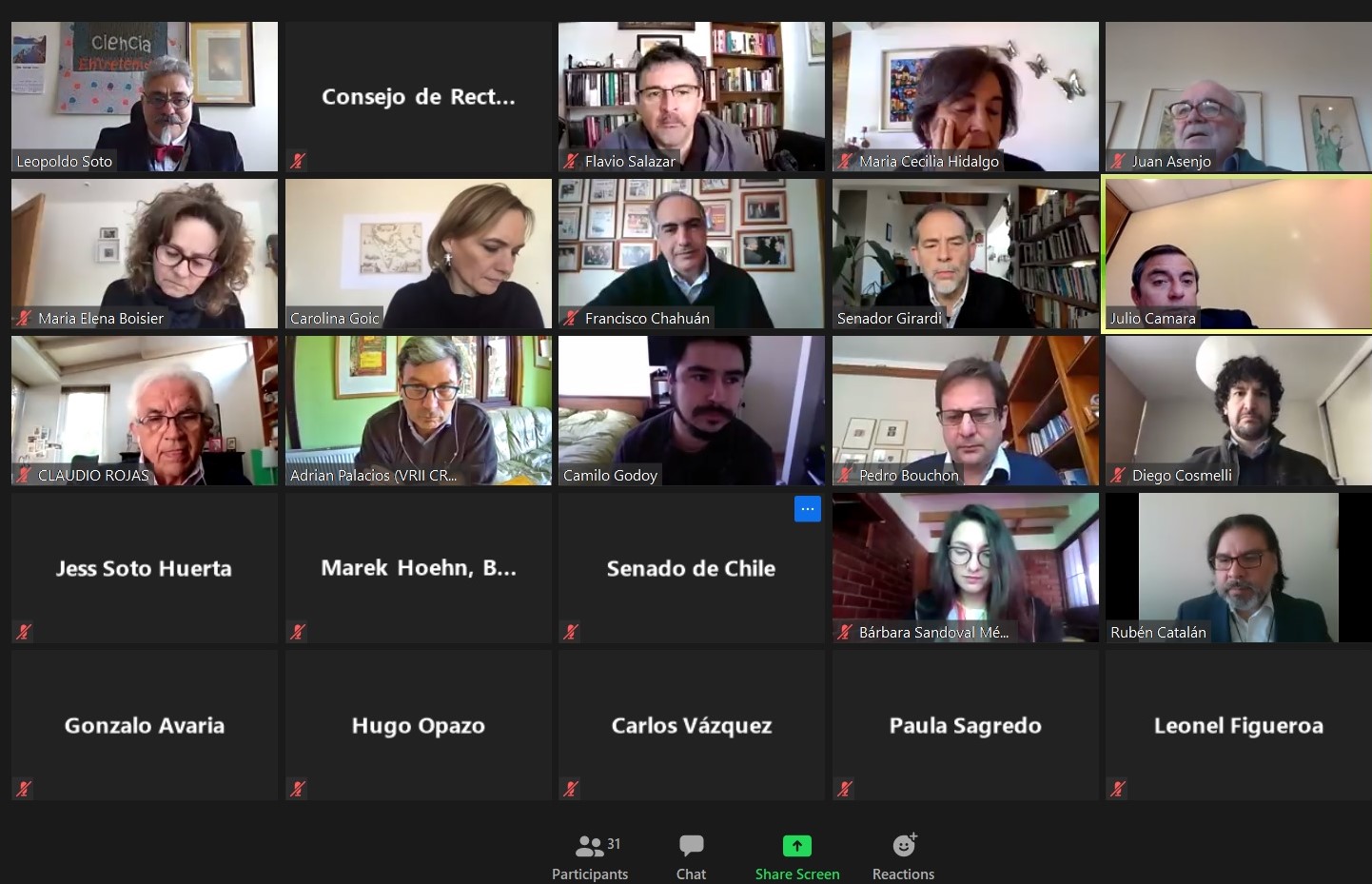 CRUCH Representative in the Future Commission of the Senate: “A country without science is not a country; a reduction to the budget is not explicable »

The Future Commission of the Senate analyzed measures to reverse the decrease in resources for science in the 2021 Budget.

The agreement was unanimous among those who participated in the session of the Senate Challenges of the Future, Science, Technology and Innovation Commission carried out electronically this Tuesday, October 6: the reduction of a 9% in the budget for science, technology, knowledge and innovation determined in the 2021 Budget will have negative consequences for the development of the sector and the country and, for this reason, it was agreed to seek formulas to reverse that decision and invite the Ministers of Finance and Science to the next session of the commission.

In addition to Senators Guido Girardi, Carolina Goic and Francisco Chahuán, representatives from universities, the Chilean Academy of Sciences and postgraduate scholarship organizations participated in this session.

In his initial speech, the president of the commission, Senator Guido Girardi (PPD), affirmed that the increase in resources for science, technology and innovation is a fundamental requirement to "improve the levels of equity" in the country. He pointed out that "there is a contradiction" between a low budget and the possibility of generating new jobs, since "Chile's potential is frontier and there are not enough experts in areas such as hydrogen" or others that require strong innovation.

In this context, regarding the elimination of the Chile Scholarships, Girardi added that “it is absurd to prevent the training of young people in the future. Here is an issue of making a country project viable towards the twenty-first century. To stay out of this is to do a huge injury to the future of the country ”.

Later, Adrián Palacios, president of the Advisory Commission for Research, Science and Technology of the Council of Rectors, affirmed that the importance of science developed by universities in Chile “has been widely evidenced during this pandemic, with the mobilization of resources, infrastructure, personnel and accumulated knowledge, with the support in the realization of diagnoses and supplies, support to society in labor legal advice, psychological support, among many others ”.

Palacios pointed out that “it is regrettable that in a scenario in which, as never before, science has acquired relevance and a transversal interest in the whole of society, it is subjected to even greater economic restrictions than those it already has. The reduction of the science budget towards other programs is marginal; however, with a tremendous negative impact on our science and technology system, already precarious and weak ”.

The representative of the universities of the Council of Rectors stressed that we must take care of the national ecosystem in CTCI (science, technology, knowledge and innovation), "including the growing number of accredited postgraduate programs, whose sustenance are national scholarships." He recalled the sustained effort of the institutions to grow in graduate school, driven by accreditations. "We generally agree to review Chile Scholarships, supporting the national system with more force, both with more scholarships and emergency management funds, extensions of terms and emergency support, also for projects that have been affected during this last period" .

On the other hand, Palacios positively highlighted the promotion of collaborations with universities developed by the Ministry of Science and the National Agency for Research and Development (ANID), aimed at a more gender-inclusive system, more decentralized and with less job insecurity. For this reason, "ANID must maintain its budget in order to improve its processes," he said.

“Here the political decision is fundamental; a country without science is not a country. Its postponement and the consequent loss of opportunities will have serious consequences. A reduction to the budget is not explainable. We are in dire need of additional funds to maintain and implement projects and training ”, he concluded.

Flavio Salazar, vice-rector for Research and Development at the University of Chile indicated that “the moral damage that is generated in the community is enormous, because it damages future expectations: if at a time when the reactivation of the country is required, science takes as an expense, which must be reduced, then it means that everything that we have discussed for several years that we need to modify the productive matrix and generate greater knowledge and greater capacities for the country is not being considered ”.

He added that "the Ministry of Science, politically, has not been at the level, it has not fulfilled the role we expected, a much stronger defense of the interests of the country in terms of its scientific development."

For his part, Diego Cosmelli, President of the Postgraduate Commission of the Council of Rectors, argued the need “not to let this budget go by like this, as it is; advanced training of people is now critical because these people are going to sustain innovation in development and knowledge. This is not the time to cut the wings of this process in Chile ”.