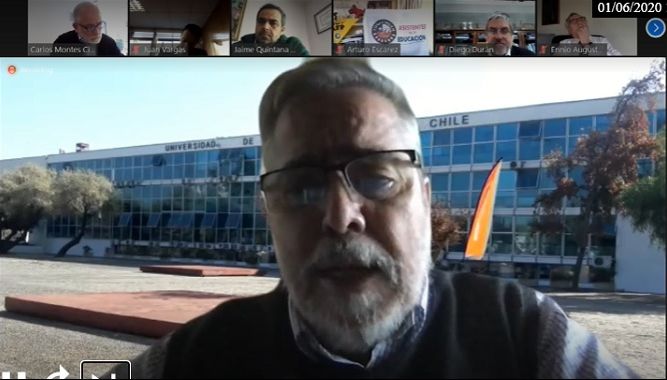 In the second session in which the Senate Education and Culture Commission analyzed the situation of the Universities in the context of the pandemic, the Mineduc Undersecretary of Higher Education rejected the proposals presented by the CRUCH in the previous session on May 25.

The Executive Vice President of the Council of Rectors and Rector of the University of Santiago, Juan Manuel Zolezzi, emphasized that “there is a greater complexity to be understood, and although it is true, the ministry probably makes the greatest effort, I think there is no understanding the bottom line of the problem, which is going to be worse in a few more months ”.

This Monday, June 1, the Senate Education and Culture Commission continued the analysis of the situation affecting higher education institutions, on the occasion of Covid-19, which began in the session on Monday, May 25. In the first session, the Executive Vice President of CRUCH, Rector Juan Manuel Zolezzi, spoke about the academic and financial impacts for CRUCH Universities and proposed six measures to face this complex crisis.

It should be remembered that the CRUCH proposed the following measures: make effective use of the surplus resources of the University Credit Solidarity Fund; create an emergency fund for higher education institutions, through a low-cost line of credit or with a state guarantee or a special fund to support CRUCH universities; carry out a new application process for student aid; repeal article 108 of Law 21.091 on loss of gratuity; condone the reimbursement of scholarship resources; and, lastly, making the use of resources associated with projects already approved by Mineduc more flexible to adapt to current requirements.

On this day, the Undersecretary of Higher Education, Juan Eduardo Vargas, presented the position of the Mineduc and rejected the proposals of the Council of Rectors, pointing out, regarding the flexibility of funds that this “would imply changing the agreements already signed, which were the ones that they made it possible to award certain tenders ”; Regarding student benefits, he indicated that "not considering 2020 in the nominal duration of the degree that students who benefit from gratuity study would have an approximate cost of US$1.400 million" and that "a new FUAS process has a projected cost of US$ 132 million ”; Regarding institutional indebtedness, he said that "the possibility for medium and small higher education institutions to access the funds" FOGAPE "(Guarantee Fund for Small Entrepreneurs) is already underway and additionally that" it is expected that those that are announced for entities larger ones can also be used by those larger Higher Education Institutions that do not become beneficiaries of FOGAPE ”; Finally, he referred to the use of surpluses from the University Credit Solidarity Fund and stated that “the legal analysis of the Mineduc in this regard is clear: the use of surpluses can only be done with respect to those generated in 2019, and the regulation gives an account of this. , which is for its taking of reason in the General Comptroller of the Republic ”.

In addition, he pointed out that the CRUCH universities could have access to the surpluses of the year 2019 “but to the extent that they can also deliver the remaining part of those surpluses to a common solidarity fund, and that this fund is available to all educational institutions. higher than required, through soft loans granted under favorable conditions ”. He argued the above, stating that “the solidarity funds have been built on the basis of the contributions that have been made mainly, only by the State, the Mineduc. The universities have managed funds but they have been supplemented year after year by the Ministry of Education. Higher education institutions have made a contribution because they have administered these funds, but ultimately there is an origin in those funds that are from the State ”.

Reactions of the rectors

The Executive Vice President of the Council of Rectors and Rector of the University of Santiago, Juan Manuel Zolezzi, emphasized that “there is a greater complexity to be understood, and although it is true, the ministry probably makes the greatest effort, I think there is no understanding the bottom line of the problem, which is going to be worse in a few more months; How do we establish something that helps together? I am very concerned about the principle behind this ”.

For his part, the President of the Consortium of State Universities (CUECH) and Rector of the University of Chile, Ennio Vivaldi, pointed out that “there has not been an argument here. Quite simply, what has been said are debatable figures, but I wanted to treat the subject from a more conceptual point of view. In the moment we are going through, the universities have given an example that the country has to unite in the face of this tremendous threat ”. Vivaldi was energetic in pointing out that "there is no recognition of the work of traditional universities and affirmed that this context is used to deliver funds that are owned by these universities to finance the rest of the institutions of the system, it seems really unusual to me" .

Meanwhile, the President of the G-9 Network and Rector of the Universidad Católica del Maule, Diego Durán, indicated that “it is strange that today there is the possibility of making this 30% more flexible and that it is not for the situation that was discussed. It is very complex to say that these meager resources today have to be used for other institutions, the deficit is enormous ”.

In turn, the President of the Regional University Association (AUR) and Rector of the University of Playa Ancha, Patricio Sanhueza, said that the Mineduc approach “disappoints me a lot. Last session as AUR we delivered the contributions that regional universities have made in the face of Covid-19, without asking the State for resources, with all the solidarity we have with our territories and our inhabitants, many of them with tremendous vulnerability. The internal social pressure is very great, there are students who have withdrawn because their parents were laid off. We have to accept that reality that affects Chile. I think it will have tremendous opposition from the university communities. More global issues must be addressed, such as the financing model for higher education. The role of the state is to support public education; the concept of the public is sometimes extended too much, but it must be adequately characterized ”.